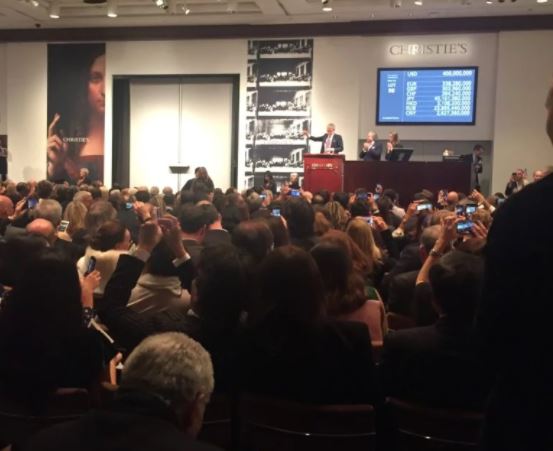 Leonardo da Vinci‘s Salvator Mundi (circa 1500), probably the last known painting by the Renaissance master in private hands, sold at Christie’s for $450.3 million. It is, by far, the most expensive work of art ever sold at auction. In fact, the price is more than double the next most expensive work ever sold, Picasso’s Les femmes d’Alger (Version ‘O’), which fetched $179.4 million in 2015.

The work went to an anonymous client of Alex Rotter, Sotheby’s global co-head of contemporary art. Before a packed salesroom and scores of camera phones held aloft, bidding opened at $70 million. The 19-minute contest eventually came down to Rotter and Francois De Poortere, the head of Christie’s Old Master painting department in New York.  After a protracted bidding war the work finally hammered down for $400 million. With the auction house’s fees, the final price was $450.3 million.

The painting was one of 58 works included in Christie’s evening sale of postwar and contemporary art on Wednesday at Rockefeller Center in New York. Salvator Mundi was consigned by the Russian billionaire Dmitry Rybolovlev, who bought it in 2013.

Until now, the most expensive painting ever sold at auction was Picasso’s Les femmes d’Alger (Version ‘O’) (1955), which was sold at Christie’s in May 2015 for $179.4 million. (Accounting for inflation, the price is around $186 million in 2017 dollars.)  Salvator Mundi also has become the most expensive Old Master painting ever sold at auction. It broke the record set by Rubens‘s Massacre of the Innocents (1612), which fetched $76.7 million (equivalent to $106 million today) at Sotheby’s in 2002.

The Leonardo painting has a dramatic backstory that involves a royal family, an estate sale, and a contentious lawsuit. Originally commissioned for the French Royal collection, it went missing for decades. In 2005, a consortium of dealers spotted the painting at an estate sale and had it authenticated as a bona fide Leonardo. In 2013, they sold the work to Swiss dealer Yves Bouvier for a price reportedly between $75 million and $80 million.

Bouvier then sold the work to Russian billionaire Dmitry Rybolovlev for a reported $127.5 million. The colossal mark-up eventually caused a contentious legal battle between the two men that is still being fought out in international courts.

Condition and restoration issues are believed to have influenced the lower offering price at Christie’s—$27.5 million less than Rybolovlev paid. The once damaged work was heavily restored ahead of its debut in a Leonardo exhibition at the National Gallery in London in 2012.

News of the painting’s sale started a new Leonardo hype. It attracted lines around the block on nearly every stop of its promotional world tour, including London and San Francisco. Nearly 27,000 people came to see the painting.    Seventy-five members of the press registered to cover the auction.