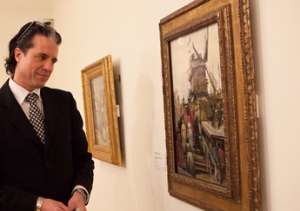 Dirk Hannema was the laughing stock of the Dutch art world. Until a suspected forgery he bought turned out to be a real Van Gogh.

A small museum in the Dutch city of Zwolle has discovered it owns a painting done by Vincent van Gogh in 1886. A depiction of the Parisian Le Blute-fin windmill made by the Dutch post-impressionist artist was presented to the public at the Fundatie museum on Wednesday.

The work was authenticated “beyond any doubt” during a technical study carried out by the Van Gogh Museum in Amsterdam, said managing director of the Zwolle museum, Ralph Keuning.

The anonymous painting had been purchased from a Paris art dealer in 1975 by the museum’s founder Dirk Hannema (1895-1984) for 6,500 francs (less than 1,000 euros). Hannema was always convinced the painting was Van Gogh’s and insured it for a sum equivalent to 35,000 euros. But other Van Gogh experts were skeptical.

Hannema’s dubious reputation is largely the reason the painting was not recognised as a real Van Gogh before this. As the managing director of Rotterdam’s Museum Boijmans in 1938, Hannema purchased a number of paintings he thought were authentic works of the Dutch painter Johannes Vermeer, which were discovered to be forgeries only years later. Hannema also claimed he owned seven Vermeers himself as a part of his private collection.

After repeated requests from the Fundatie museum, the experts at the Van Gogh Museum finally looked into the matter.  As Hannema had already pointed out, Van Gogh had painted other pictures of the same 17th century Parisian windmill. The Blute-fin adorns the highest point of Montmartre hill in the north of Paris, and was a tourist attraction of sorts, as it still is today. The mill also lay close to Van Gogh’s brother Theo’s apartment. Vincent often visited Theo during the period he lived in Paris -from March 1886 till the spring of 1887

Discoveries of new works by Van Gogh are exceedingly rare. Ever since Jacob Baart de la Faille published his almost exhaustive reference, The Works of Vincent van Gogh, in 1970, only five paintings have been added to the master’s oeuvre of some 900 works.

The Van Gogh Museum’s technical research has yielded some very convincing evidence that this particular painting is authentic. The materials used and the size of the canvas (55 by 38 centimetres) are the same Van Gogh used for other works from his Paris period. The back of the painting bears the stamp of the Parisian art-supplies store, Rey et Perrot, where Van Gogh regularly shopped.

Computer analysis has shown that the yarn patterns in the canvas correspond with those in another painting from the same period. The primers used, a red organic lacquer and a chrome-based yellow pigment, have been attributed to Van Gogh’s Parisian period before, as has the technique of painting figures over a still-wet background.   February 24th. 2010